A fairly common chronic condition that afflicts people is rheumatoid arthritis (RA); a form of chronic joint inflammation that can have major impact on quality of life. The exact cause of rheumatoid arthritis is unknown, but it has a significant autoimmune component. This is how it differs starkly from the much more common osteoarthritis, which is more of a “wear-and-tear” form of arthritis that results from mechanical use of joints over a long and active life. Rheumatoid arthritis not only affects the joints, but also presents with systemic inflammatory symptoms.

On the average, about 5 adults out of 1000 are dealing with rheumatoid arthritis, with the prevalent age being around 35–45 years. It is much more commonly seen in women, by a ratio of 3 to 1. However, after age 50, the sex difference is less pronounced. Typically, the disease progresses most rapidly during the first six years, and 80% of patients will develop some permanent joint abnormalities within 10 years. 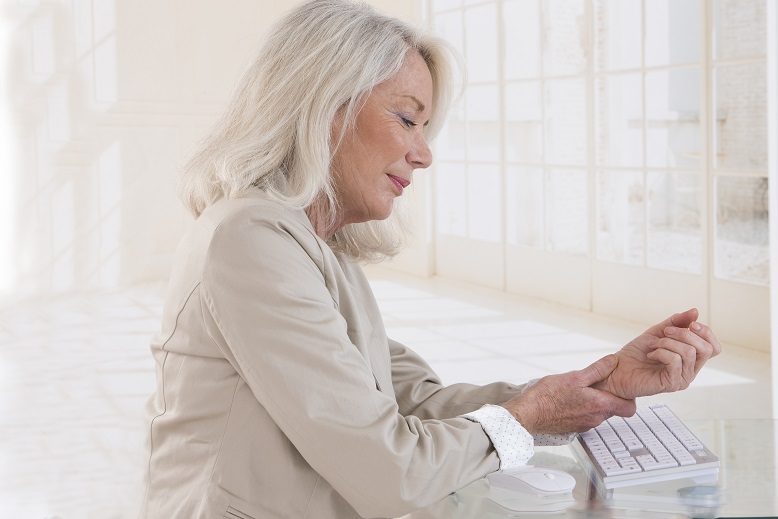 The onset is usually gradual and insidious, and the systemic symptoms are often the first to appear for weeks prior to a diagnosis. These may include afternoon fatigue and malaise, loss of appetite, sweats, generalized weakness, and low-grade fever. So they are almost like flu-like symptoms, and may be mistaken for that.

There can also be an acute onset of RA following some kind of stress, such as a traumatic injury or surgery. It is not entirely clear why, but such individuals can be much more predisposed to developing RA. 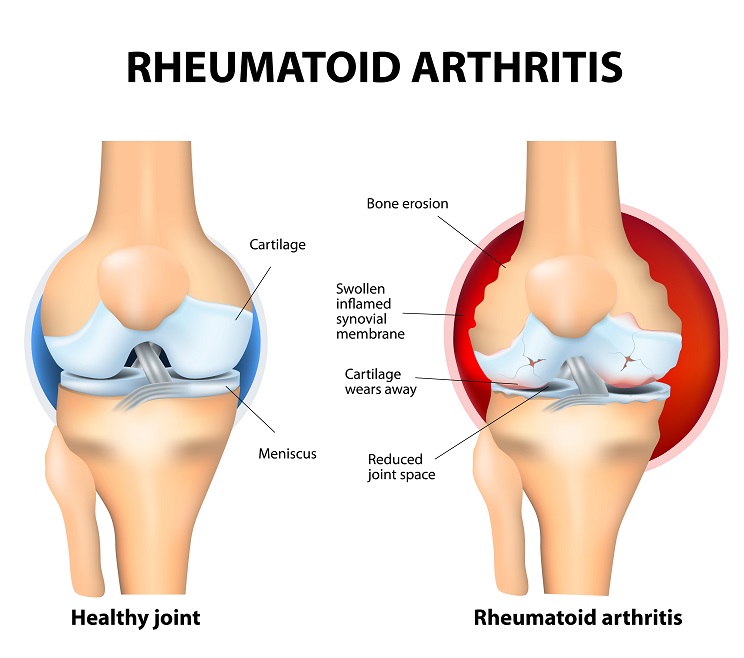 Joints are typically affected symmetrically throughout the body, mostly affecting the hands and feet, with redness, warmth, swelling, and limitation of motion. Joint swelling is soft and spongy, as opposed to osteoarthritis, which is more of a bony swelling. There is also typically joint stiffness experienced on rising in the morning, lasting more than 60 minutes, but stiffness can also occur after any period of prolonged inactivity. 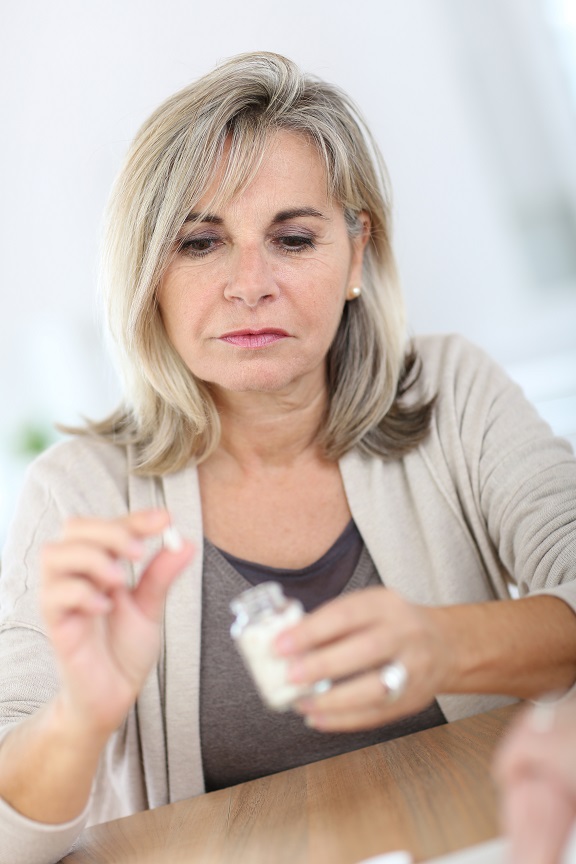 One of the most common standard treatments for RA-related joint pain are nonsteroidal anti-inflammatory drugs (NSAIDs), such as ibuprofen and diclofenac. It often takes about two weeks for these drugs to be effective, and so doses should never be increased any more frequently than this. NSAIDs work by suppressing the cyclooxygenase enzymes that work to produce certain prostaglandins, which are cell signals that promote inflammation. Potential side effects of long-term or high-dose NSAID use can be peptic ulcer, GI bleeding, headaches, confusion, worsening of high blood pressure, and kidney irritation.

Another commonly used standard treatment is disease-modifying antirheumatic drugs (DMARDs). These drugs seem to slow the progression of rheumatoid arthritis. About two thirds of patients improve overall with the use of these drugs, but complete resolution is rare. They also have little pain-relieving benefit, and so are often used in combination with NSAIDs.

Corticosteroids are probably your most serious anti-inflammatory drugs. They work very rapidly and do appear to slow bone erosion, but they do not prevent joint destruction, and their benefit tends to diminish over time. Also, you can get severe rebound inflammation if the drugs are withdrawn too quickly. Because of their long-term side effects, steroid injections into affected joints are restricted to four doses per year. Long-term side effects include weight gain, poor immune function, thinning of skin that bruises easily, and weakening of bones that can lead to osteoporosis.

Mind-body therapies can be very helpful to manage stress. If you are under stress, your perception of pain will be higher, and so your symptoms will seem worse. Chronically elevated cortisol, which is your stress hormone, will make you more susceptible to being sick. Engaging in fun hobbies, breathing exercises, positive visualizations, and exercises such as yoga and tai chi can be great strategies for stress management.

One of the main herbal medications that can be helpful for inflammatory conditions like RA is curcumin. Curcumin is a derivative of turmeric, a spice commonly used in Indian cuisine. It is the compound that gives turmeric its yellow colour. Curcumin has been shown in several studies to have significant anti-inflammatory effects.

In a pilot study conducted in 2012,[1] 45 patients with active RA were randomized to one of three groups: one to receive 500 mg of curcumin per day, one to receive 50 mg of diclofenac sodium per day (a typical NSAID given for RA), and one to receive both medications. After eight weeks, all three groups showed statistically significant improvement in various blood markers of inflammation. 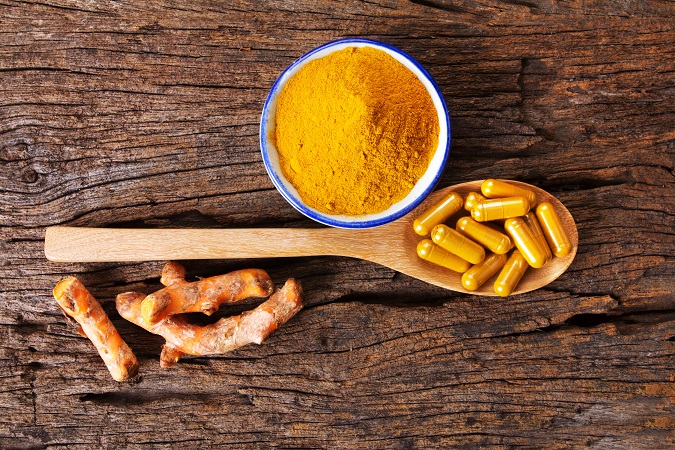 Although there was no statistically significant difference in improvement between each group, there was a clear trend showing that curcumin was superior to diclofenac in its anti-inflammatory activity. In fact, the curcumin was somewhat less effective in the group where it was combined with diclofenac, even though the dose was the same. Diclofenac also demonstrated adverse side effects such as itching and swelling around the eyes and dimness of vision, which were not observed in the curcumin group.

So, not only was curcumin by itself shown to be equivalent to standard treatment in this study, but it was shown to likely be the superior choice of treatment.

The Value of Antioxidants

Though direct clinical evidence is limited, it is reasonable to expect that antioxidant supplementation may have a protective effect in RA. Antioxidants are molecules with extra electrons in their structures, which they can donate to free-radical oxygen molecules, thus quenching and neutralizing them. Superoxide dismutase is an enzyme that serves as an excellent antioxidant, and dietary sources of this would be things like barley grass, broccoli, Brussels sprouts, cabbage, and cantaloupe. So, these are all things to encourage in the diet.

Although antioxidant supplementation may be helpful in some cases, it is generally considered better to get your antioxidant benefit directly from the diet in this way.

This brings me to the subject of dietary-based therapy. Some evidence suggests that a vegetarian diet can improve the symptoms of RA.

One 13-month study looked at 27 subjects who ate a vegetarian diet, alongside 26 matched controls who consumed their normal diet. The treatment subjects showed significant improvements after one month, in measurements of morning stiffness, grip strength, ESR, CRP, platelet count, and rheumatoid factor. These benefits were maintained until the end of the study.[4][5]

Four such trials on vegetarian diets have been subjected to systematic review, meaning all their data were analyzed collectively to measure the overall weight of it.[6] The conclusion was that there can be clinically significant long-term benefit to RA with a vegetarian diet.

As I discussed in my previous article, people can experience systemic inflammatory reactions because of hidden food sensitivities, mediated by the IgG antibody. It is not clear that RA is “caused” by such reactions to food, but they may play a role in worsening or perpetuating symptoms.

The IgG antibody is normally involved in the body’s reaction to infectious organisms, such as viruses and bacteria, and the immune reaction that it triggers is not as quick or as acute as the classic food allergy. It may be hours or even up to a couple of days after eating the offending food before reaction symptoms are experienced, so the offending food can be difficult to identify. There is also a range of symptoms that can result, such as skin inflammation like eczema or acne, general malaise, fatigue, headaches, or persistent joint pain.

Now if the intestinal lining becomes inflamed because of exposure to an “allergenic” food, it can actually compromise the proteins that bind the lining cells together (enterocytes), and create gaps in the gut lining through which waste products, bacteria, or not-fully-digested proteins and food particles can leak through inappropriately into the blood. This is commonly referred to as “leaky gut syndrome.” The body then mounts an inflammatory response to these factors in the blood, which can contribute to chronic inflammatory diseases such as RA.

Forty one patients with known/suspected food allergy or food sensitivity were evaluated for the integrity of their intestinal lining while on a free diet.[7] Intestinal permeability was evaluated with the lactulose/mannitol test. Compared to control subjects with no food sensitivities, there was a significant increase in measured intestinal permeability in those with food allergies/sensitivities (p = 0.003).

Another mechanism by which the diet can have an impact on gut integrity, and thus chronic disease, is by the health and variety of symbiotic bacteria that live in our intestines. There are ten times more bacterial cells in your body than there are human cells, and these bacteria are essential to our biology. The mild stimulation that these bacteria provide to our mucosa-associated lymphoid tissue (MALT) help our bodies maintain competent immune systems that will react properly to real threats and build a tolerance to those things that are not threats.

Forty three adult patients with chronic RA were randomized to either the experimental group to receive a vegan diet of uncooked and fermented foods, rich in Lactobacilli (prepackaged food provided), and the control group to continue their regular omnivorous diet.[8]

After one month, 27.8% of patients in the vegan diet group, and none in the control group, showed a greater than 20% improvement in pain scale, number of tender joints, number of swollen joints, and ESR (a blood marker of inflammation).

What this means is that the uncooked vegan diet produced a significant observable shift in the composition of fecal flora within the HI responders of the test group, and that this shift in fecal flora was associated with a clinical improvement of disease activity.

This suggests that there is a relationship between the gastrointestinal microbes, the mucosal and systemic immune responses, and the development of arthritis. Of course, we know that RA involves a derangement of immune activity to some degree, leading to autoimmune attack on synovial cells.

With this in mind, it is reasonable to suppose that probiotic therapy aimed at normalizing the gut microflora can help maintain proper gastrointestinal and immune-system function, thus downregulating the abnormal inflammatory response seen in rheumatoid arthritis.

In an Australian study conducted in 2010,[9] 45 men and women with RA were randomized to receive one capsule per day of a probiotic containing 2 billion CFU of Bacillus coagulans, or placebo, for 60 days. No change was made to the standard treatment for any of these patients. Probiotic therapy was tested for its benefit in addition to standard drug therapy.

The authors concluded that lactic acid–producing probiotic bacteria, such as Bacillus coagulans, may be considered a safe and effective adjunct therapy for the relief of symptoms of rheumatoid arthritis.

View all posts by admin →